A historical guide to the temples of Angkor 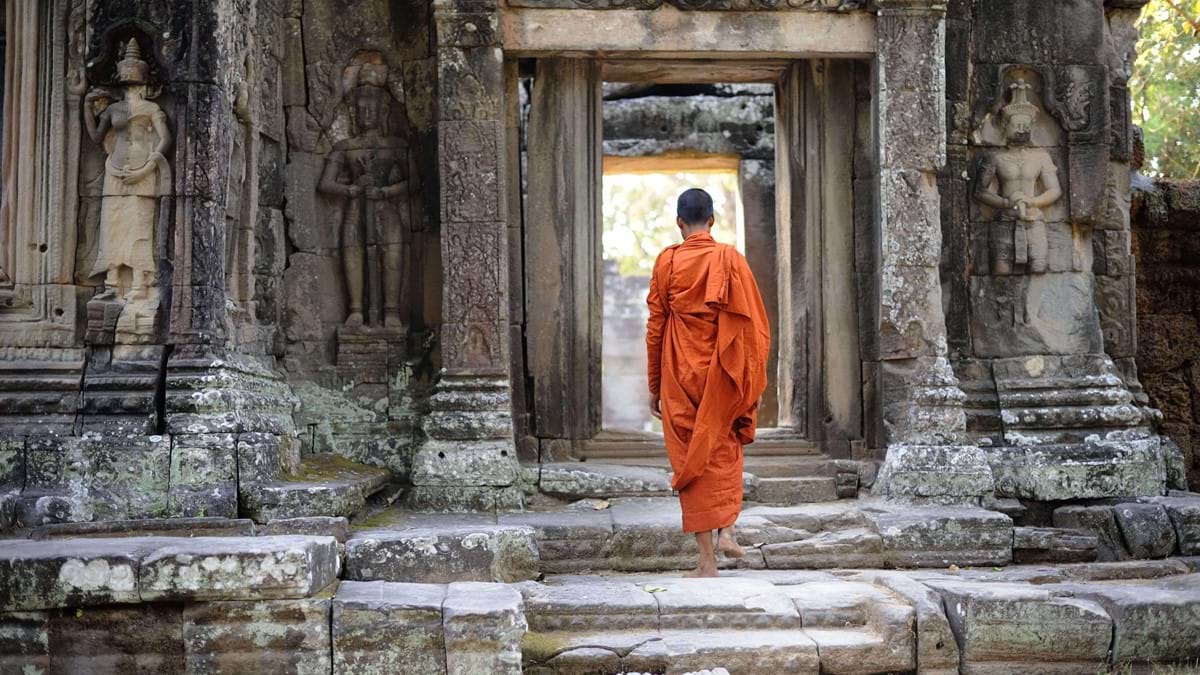 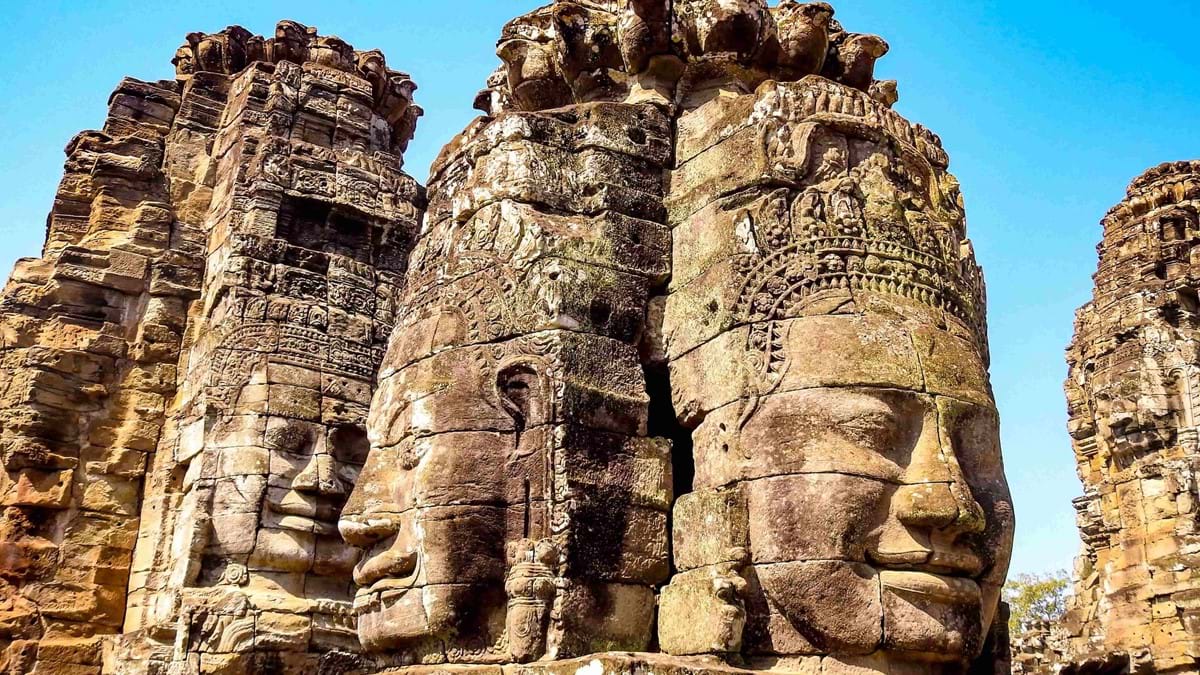 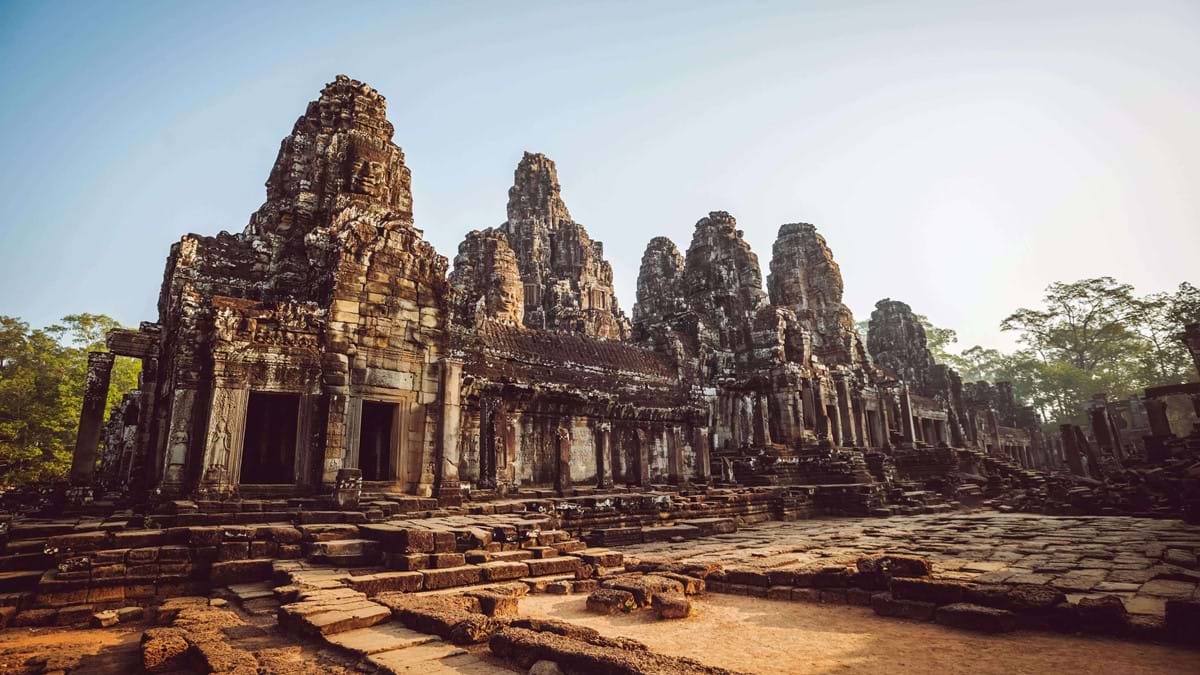 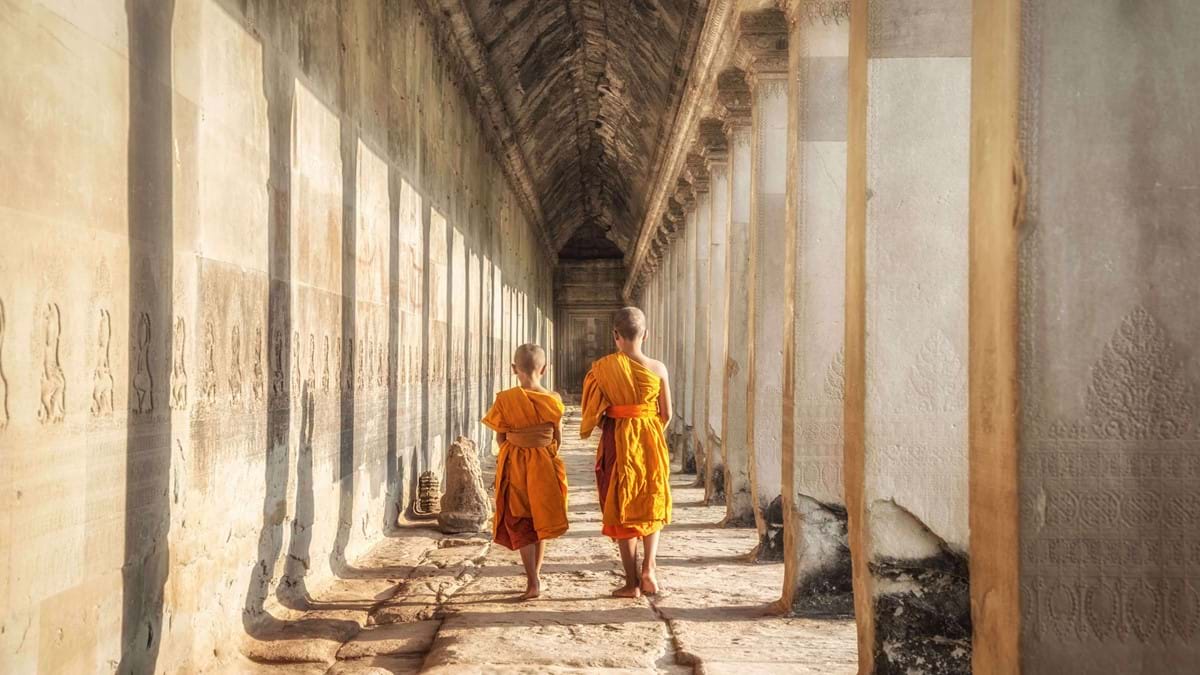 In August 1296, a young Chinese man travelled to Angkor, the main artery of Cambodia’s Khmer Empire. Sent on official diplomatic duties by Chinese emperor Temür, Zhou Daguan recorded observations of his 11-month stay in the wealthy capital. This later formed A Record of Cambodia: The Land and Its People, the only remaining primary account of life at Angkor.

More than 700 years later, the gold is gone. The gold towers, gold Buddhas, and gilded stuccos lost to theft and centuries of erosion. But the UNESCO-listed ruins still stand as a captivating look into an ancient, pre-industrial era, making it Cambodia’s most popular destination for travellers, history buffs, and archaeology enthusiasts.

Spanning 15 miles from east to west and five miles north to south, Angkor’s archaeological park is located in Northern Cambodia, just north of Siem Reap. The most distinctive temple on site is Angkor Wat, a building that features on the present-day Cambodian flag.

Built by King Suryavarman II, who ruled between 1113 to 1150, it served as the administrative hub for his powerful empire. As per the Khmer’s construction style, Angkor Wat was built from blocks of sandstone. The sandstone was quarried from the Kulen Hills, approximately 18 miles north of the temple, and ferried over using a series of canals.

By the conclusion of the 13th century, the temple had transitioned into a Buddhist site, despite originally being constructed as the king’s dedication to his Hindu god of protection, Vishnu. Buddhist monks then took over the site, however, it was eventually abandoned by the 16th century.

In 1860, the temple ruins - then shrouded in jungle overgrowth - were ‘rediscovered’ by French archaeologist Henri Mouho. Technically, Cambodian locals were already aware of the site, but Mouhot was the first westerner to publicise its existence, leading to an extensive restoration project. In 1992, Angkor was declared a UNESCO World Heritage Site (visit our guide to the best UNESCO sites).

The gold tower Zhou mentioned in his book is the Bayon. Gone are the shining buddhas, however it still presents an imposing sight in stone. The final state temple built in the Angkor complex, the architectural style of Bayon is noticeably different from Angkor Wat and other major temples within the archaeological park

Ordered to be constructed by Jayavarman VII in the mid 12th to early 13th centuries, it is sometimes referred to as Jayavarman's Temple, in honour of the Khmer king. However, it's best known for the smiling faces carved into the temple’s many towers. There are 50 towers around Bayon, with more than 200 faces in various states of wear. The commonality is the same tranquil expression, a soft smile with eyes peacefully closed, as if in a state of meditation.

Bayon is home to a wealth of intricate, well-preserved carvings. The southern wall depicts scenes of a marine battle between the Khmer and the Cham and other walls feature carvings of everyday scenes, including food markets, childbirth, and religious rites of passage. Any carvings left uncompleted are said to be a result of Jayavarman VII’s death.

Banteay Kdei, which translates to ‘A Citadel of Chambers’, is a Buddhist temple within the Angkor archaeological complex. Also built during the reign of Jayavarman VII, the temple is made up of a striking maze of chambers, featuring three enclosure walls and two concentric galleries from which towers spring up. Smaller than the other temples within the park, Banteay Kdei is a great option for visitors who prefer fewer crowds.

Unfortunately, the original construction work of Banteay Kdei was rapidly and imprecisely completed, plus the quality of the sandstone was softer than the sandstone used for constructing Angkor Wat. As a result, the temple has recently had to undergo further renovations.

During the dry season, October to April, expect hot weather in Cambodia. Be sure to apply sunscreen regularly, wear breathable clothing, and stay hydrated. If there’s the option to visit the temple at sunrise, or just before sunset, take it! You’ll not only avoid crowds and witness a colourful, atmospheric view, but you’ll be able to avoid the hottest hours of the day.

Angkor is a sacred religious site. As such, you’ll need to wear trousers or skirts below the knees and cover shoulders out of respect. You might miss out on access to certain temples if you aren’t dressed appropriately. For more information, read Siem Reap’s visitor code of conduct. If you’re heading over on one of our tours, our trusted guides will be sure to keep you informed. So, there’s no need to stress.

We’re living in a time that doesn’t make travel all that easy. So, until you set off on one of our trips to Cambodia, we can recommend exploring the fascinating archaeological complex from the comfort of your home (at least that way you won’t need to worry about overheating!).

Google offers an immersive street view tour of Angkor Wat. Use the platform to virtually walk through Angkor Wat, Angkor Thom, and the filming location of Tomb Raider, Ta Prohm.

If you’d like to dive even deeper into the origins of Angkor and find out what daily life would have been like during its heyday, head over to Virtual Angkor. Put together by archaeologists, historians, and virtual experience professionals, you can click through an engaging selection of 360-degree panoramas and view vivid artist’s renderings of daily life at the time.

Angkor Wat put Cambodia on the map as a must-visit Southeast Asian destination, however, the country doesn’t end with its ancient temples. To explore more of this multi-layered and unique country, take a look at our Cambodia tours.