For the chance to explore a doomed ancient town and gain a real sense of everyday Roman life, there is nowhere quite like Pompeii.

The famous historic site sits in a large town, handily also called Pompeii. While the town itself may not be brimming with tourist attractions, it has a charming bustling atmosphere that feels local, despite its proximity to one of the world's best known archaeological sites. Home to elegant period buildings, al fresco dining and laid back piazzas, it makes a pleasant base for Pompeii holidays exploring the ancient ruins themselves. Located in Italy's Campania region, the town also provides the opportunity to visit delightful nearby destinations such as Naples, Sorrento and Salerno, as well as the country's other famous ancient town; Herculaneum.

Of course, most visitors to the town will be doing so on their way to see the ruins, an extraordinary UNESCO World Heritage site. Pompeii was once a thriving port town, being a centre of trade for fish and wine, and a holiday resort for affluent Romans. It was destroyed in August 79 AD following the eruption of Mount Vesuvius; itself another popular stop on many Pompeii tours. Thankfully the majority of the town's population had already been evacuated, heeding the ominous warning of the volcano spouting ash days before. Still the eruption is believed to have taken around 2,000 lives, and destroyed one of the region's most important commercial hubs. The town was left eerily frozen in time, and as a result it has become one of the very best ways to get a real taste for what ancient Roman life was really like.

Today one of the world's most visited archaeological sites, the ruins of Pompeii were first discovered in 1600. However, excavations did not begin until 1748, and thrilling finds are still being unearthed today. From heated swimming pools to ancient graffiti, the site has provided more clues into the lives of ancient Romans than any other. Whether you consider yourself a history buff or not, it is impossible not to find yourself captivated by the wealth of rich history and intriguing discoveries on display here. And with 163 acres of bygone Roman life to explore, you could spend several Pompeii trips wandering through these ancient streets.

THINGS TO DO IN POMPEII

The ancient ruins cover a vast area and there is plenty to see. You'll find almost all of the essential features you'd expect from a bustling town dotted around the archaeological site. From homes and shops to baths and temples, it soon becomes apparent how magnificent the town would have been. There have been some more surprising discoveries too; a brothel, political graffiti and a luxury hotel mid-construction are among the more unexpected highlights of many Pompeii holidays. Of course there are sombre sights, too. The most moving of all is undoubtedly the casts made from the bodies of those that perished in the eruption, their final moments frozen in time.

The town's theatres make for impressive sights. The larger of the two; the Teatro Grande is an open-air amphitheater that would've played host to ancient plays, while the Odeon was a more intimate venue for poetry and musical performances. Speaking from the latter's stage today you can still hear your voice amplified as if using a microphone. The town's amphitheatre remains a staggering sight. Able to hold up to 12,000 spectators, it's here that gladiator battles would've taken place, and having been built in 70 BC it is the world's oldest surviving Roman amphitheatre. Another popular stop on most Pompeii tours is the town's baths. Complete with changing rooms, hot and cold baths, and gymnasiums, they provide a fascinating insight into one of the locals' most important gathering spots.

Once you've finished exploring the ancient town, there's a number of other fantastic attractions to add to Pompeii trips. The modern town is home to a happy variety of restaurants, cafes and bars, and you'll also find plenty of shopping opportunities, covering everything from chic clothing to quirky souvenirs. Further afield, Mount Vesuvius makes for an enthralling trip. As one of the two remaining active volcanoes in Continental Europe, and the peak responsible for Pompeii's destruction, it sits as an imposing figure. It's a relatively easy climb to the rim of the crater, and the surrounding national park is equally scenic, with wineries and charming farmland. Close by is Herculaneum, another UNESCO World Heritage Site and ancient town destroyed by the eruption of 79 AD. It's smaller than its more famous neighbour, but much of the town is better preserved than Pompeii. Elsewhere, the enchanting city of Naples, with its winding streets, castles and palaces, is around 30 minutes from Pompeii, while the arresting coastal town of Sorrento can be reached in around 45 minutes. 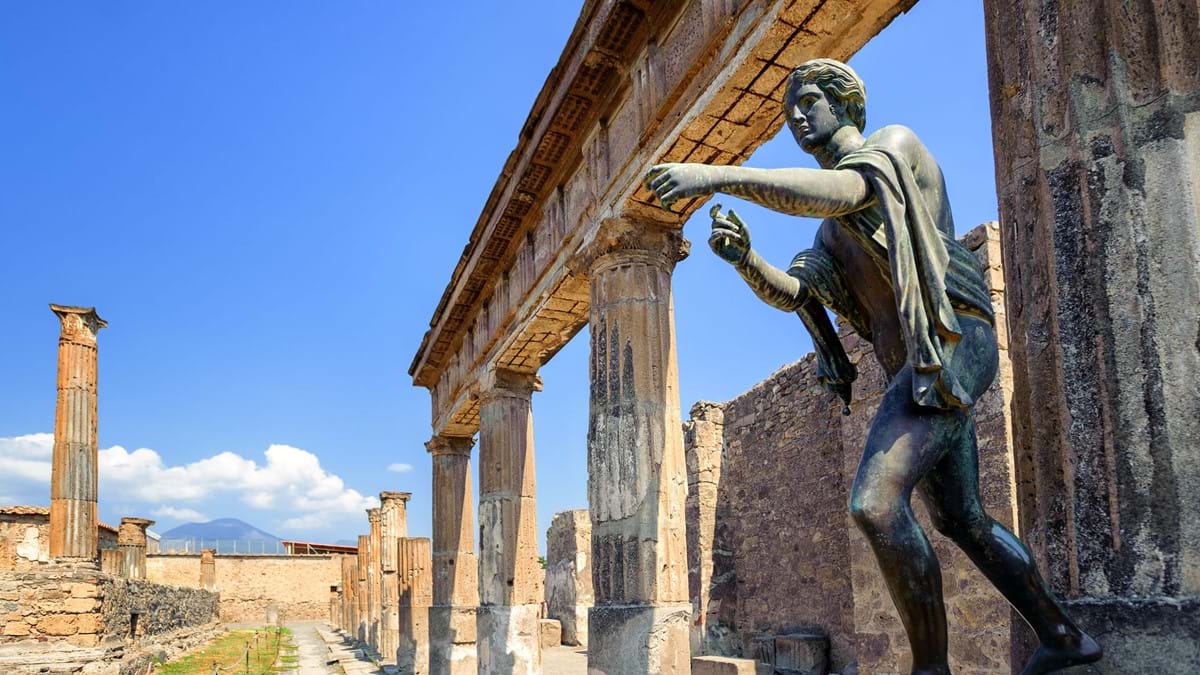 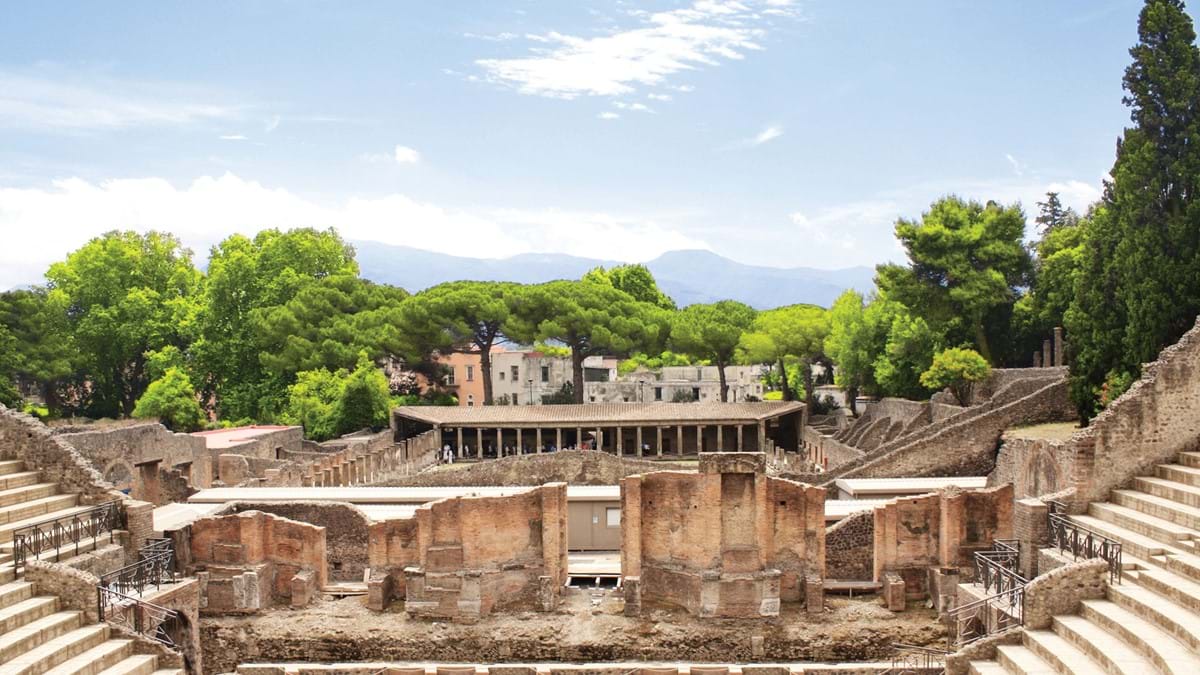 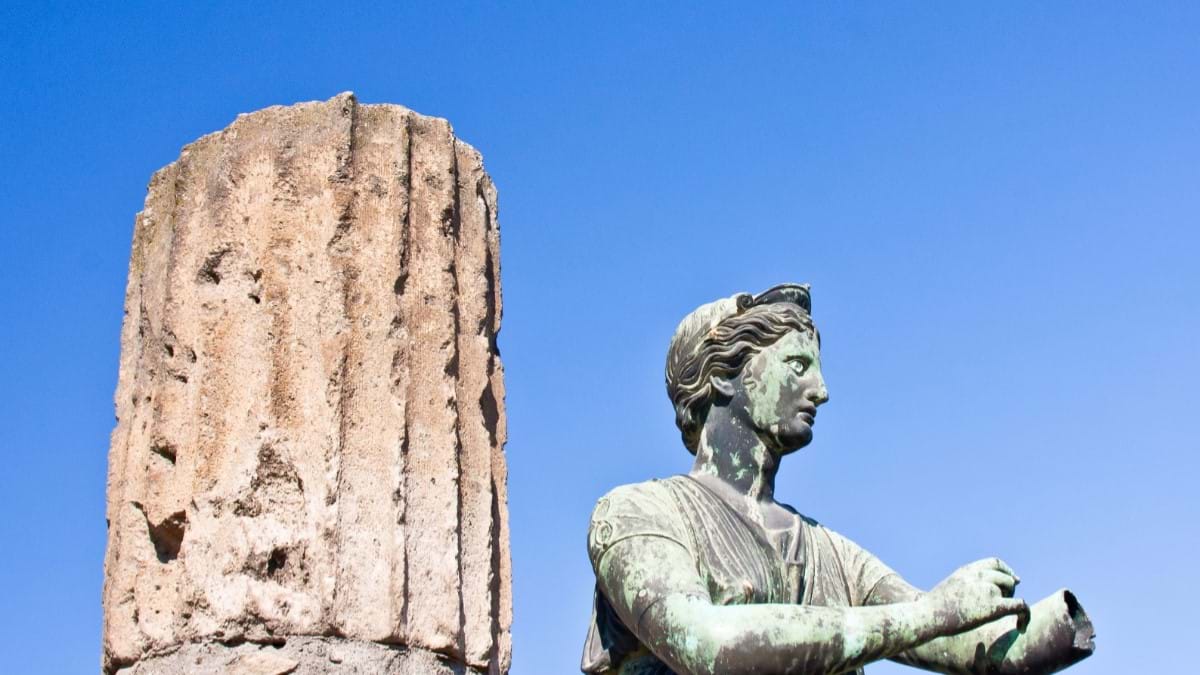 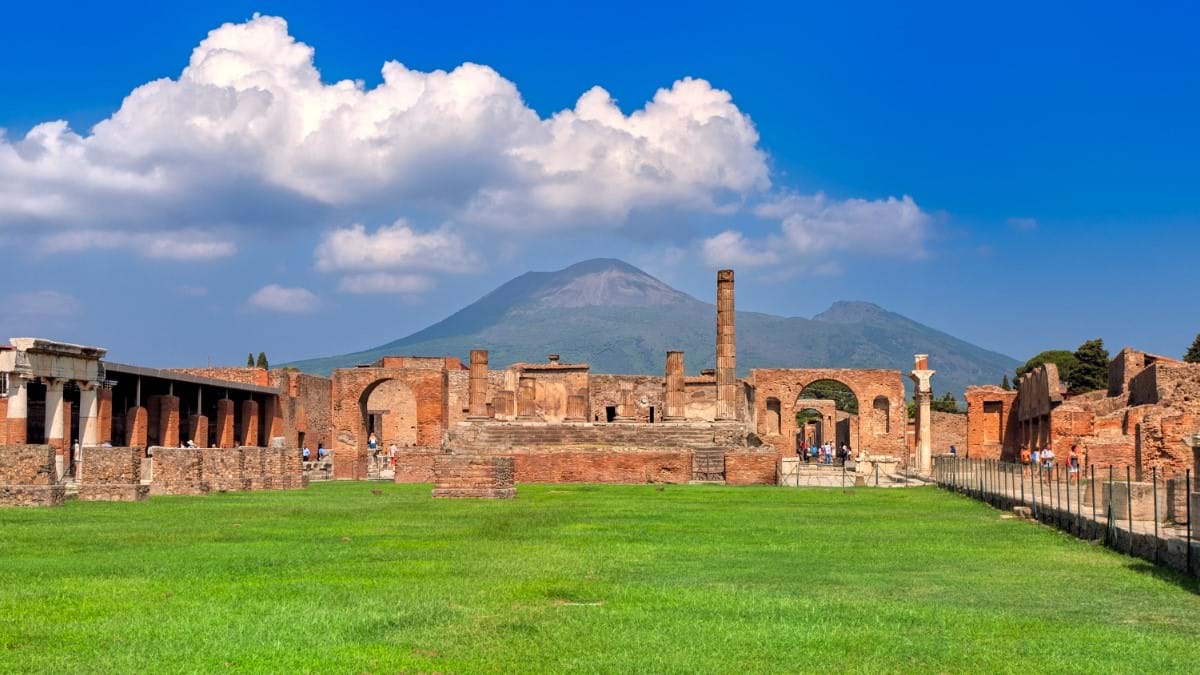 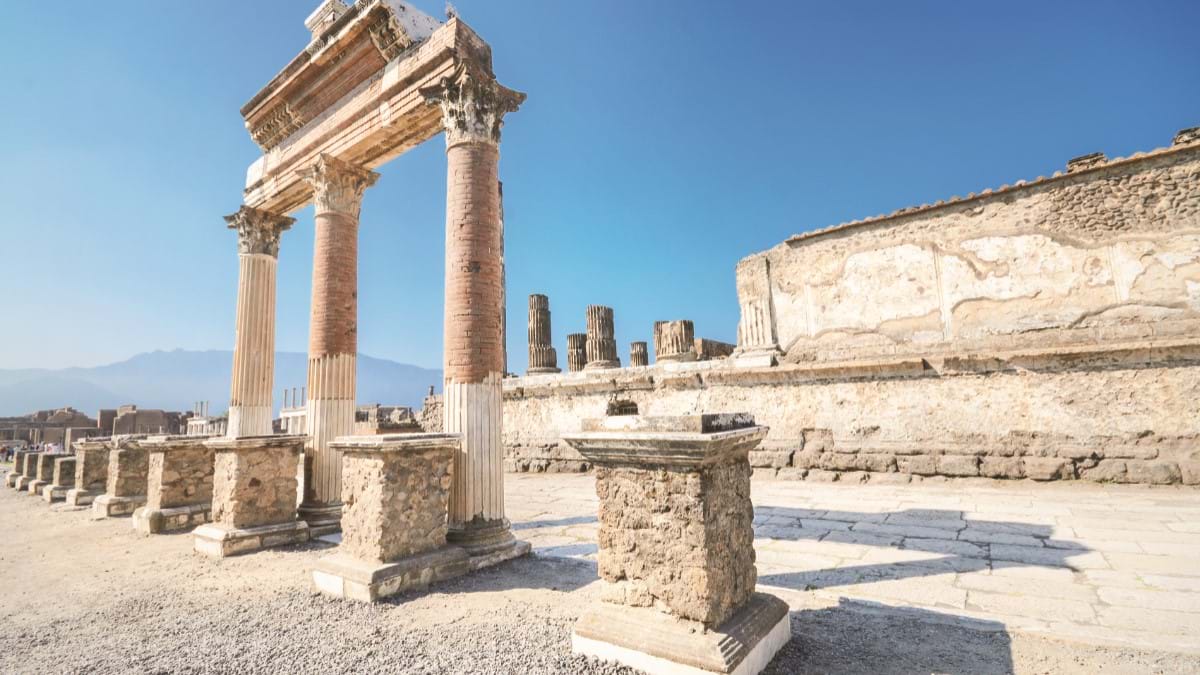 FOOD AND DRINK IN POMPEII

Pompeii's ancient locals may have dined on the likes of giraffe meat and sea urchins, but thankfully today the culinary scene is rather more appetising. The modern town is home to a great variety of cafes and restaurants, and it makes a charming spot for an aperitif at the sun sets. Further afield, a visit to sample the local flavours of Naples is a must. Believed to be the place where pizza was first created, the atmospheric city is home to some of the country's finest food, be it pasta, seafood, or, of course, pizza.

Naturally, Pompeii holidays would not be complete without trying a few of the local dishes. The most popular in the Campania region of Italy include Parmigiana Melanzane; thin slices of fried aubergine topped with tomato sauce and mozzarella and then baked, and Risotto alla Pescatora; a delicious risotto that makes use of the region's superb seafood, which usually includes shrimp, squid, cuttlefish, scampi, mussels and clams. Another must try is, of course, the local pizza. Whether you opt for a simple but flavourful Margherita, a Salsiccia; spiced Italian sausage, or a Dolce Piccante, with chicken, sweet peppers and caramelised onion, you can be sure of a mouthwatering meal.