A guide to exploring Kerala’s backwaters by boat 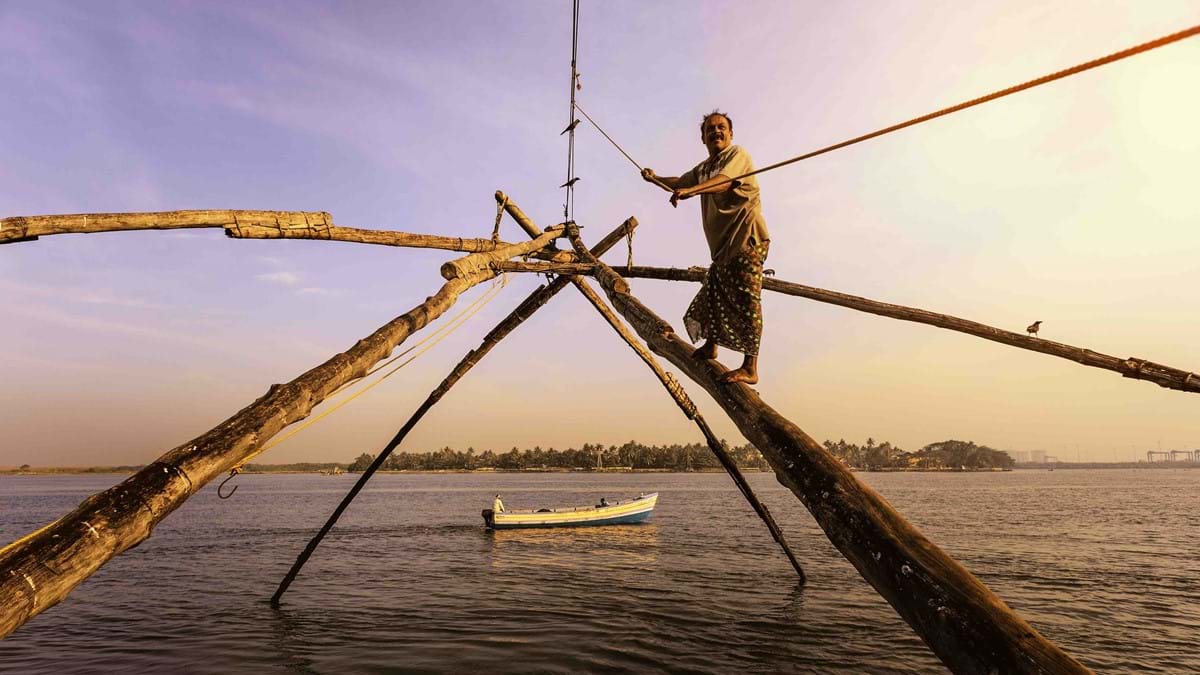 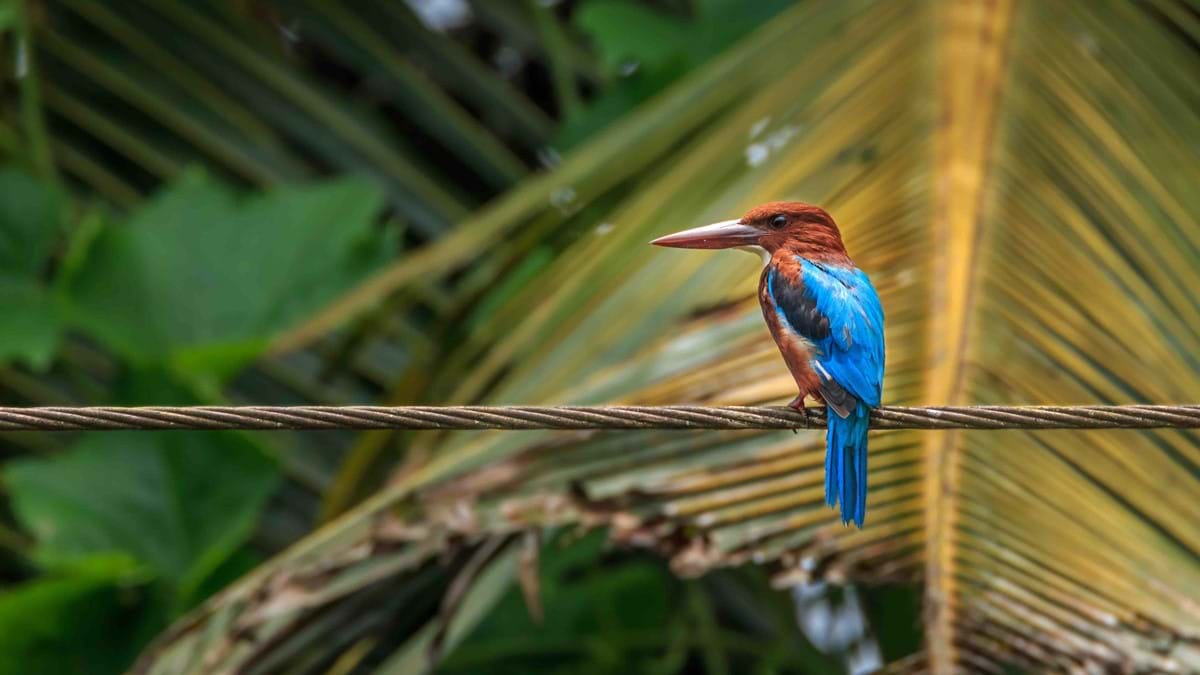 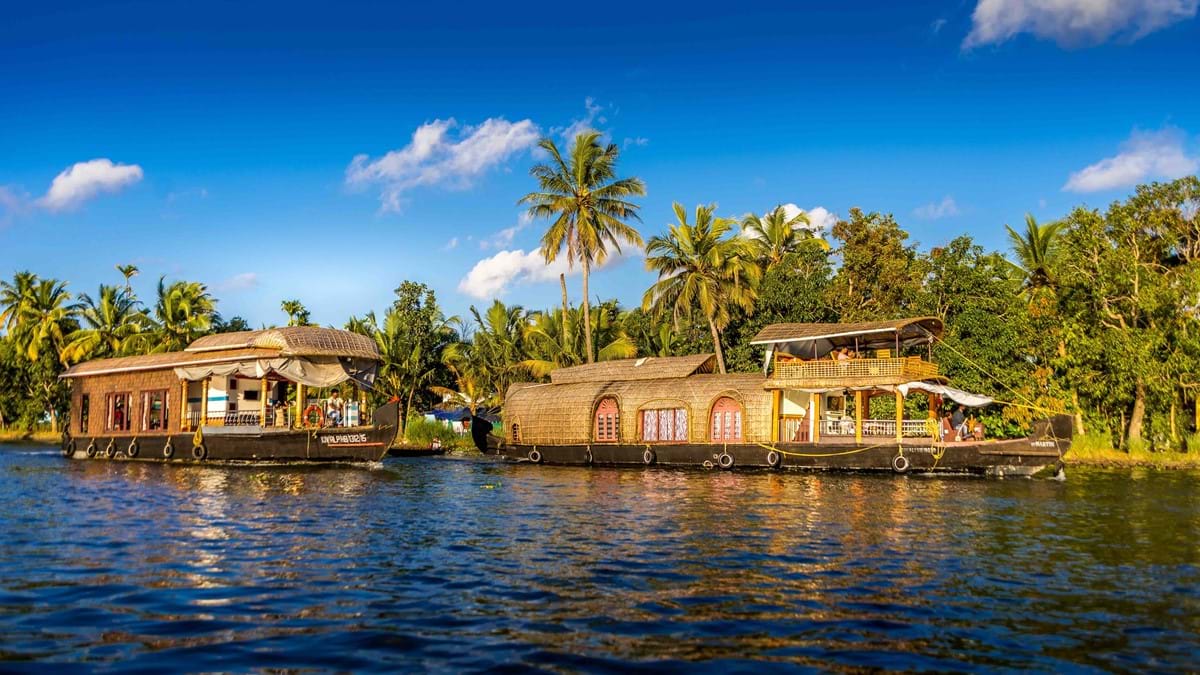 Comprising tranquil and picturesque canals, lakes, rivers, and lagoons, the backwaters of Kerala, India, are located parallel to the Arabian Sea. If you find yourself visiting 'God’s Own Country', chances are you’ll want to explore the state’s beautiful waters.

Surrounded by verdant green landscape, interesting wildlife, and local villages, making a journey through the backwaters and staying in a houseboat will give you a mesmerising, once-in-a-lifetime experience.

What are the backwaters of Kerala?

The labyrinthine backwaters are largely made up of 38 rivers that feed five large lakes, the largest of which is glistening, awe-inspiring Vembanad, which covers a vast area of over 1,242 square miles.

The natural wonder of the backwaters was formed over centuries of monsoon rains flowing down from the Western Ghat mountain range, and waves and currents from the sea, creating small islands and palm-lined waterways.

Within and around this water network, there are towns and cities from which backwater cruises start. Situated between the Keralan cities of Kochi and Kollam, the main hub for entering the backwaters is Alleppey (also known as Alappuzha), which has been dubbed the ‘Venice of the East’.

For centuries, the locals in Kerala have used the backwaters for fishing, agriculture, and transportation. There is a strong tradition of boat making, and using coir (coconut fibres) in local handicrafts.

Traditional boat races continue to draw huge numbers of people – locals and tourists alike – to the spectacle of snake-shaped boats competing against each other amidst the sound of local drums.

The history of these boat races can be traced back 400 years to when the kings of Alleppey and surrounding areas fought each other in boats along the waterways.

These days, the boat races are mostly held annually between July and September, creating much excitement and pageantry in the backwater region.

Staying in a kettuvallam

Staying overnight in a traditional Keralan houseboat – a kettuvallam – is an unmissable experience. In the local Malayalam language, kettu means to tie and vallam means boat.

These houseboats used to be an essential mode of transport to collect and carry local products from remote parts of the backwaters. Each kettuvallam could carry up to 30 tonnes of goods and were originally used to transport rice that was harvested in the fertile plains around the backwaters, as well as fish and spices. These journeys were usually made between Kuttanad and Cochin port, which could take up to three days.

Each kettuvallam is constructed using traditional boat building principles and techniques. The main wood used in the construction is 'Anjili' from a tropical tree native to Kerala. Typically around 100 feet long and 30 feet wide, these boats are covered in thatched roofs, providing those onboard with protection against the sun and rain.

The hull is made of wooden planks, which are then tied together and strengthened by ropes made from coir.

These boats have since been converted into comfortable floating accommodation for tourists, with western-style toilets, modern amenities, a cosy sleeping area, and an open deck to sit back and relax.

If you’re on an organised tour, such as one of our Newmarket Holidays tours, you’ll have the opportunity to stay on one of these incredible boats overnight, tour the backwaters, and have delicious Keralan food served to you by onboard staff.

What you’ll see on a tour around the backwaters

As you wend your way on a kettuvallam through the peaceful crisscrossing waterways, you’ll experience the charm and beauty of the backwaters.

The verdant green of the trees and shrubs lining the banks, and the dazzling blue of the water make for a breath-taking view as you embrace the slow pace of life of the backwaters. You’ll view the lush rice paddy fields, and trees upon trees of local yam, banana, and cassava.

Flitting above the trees and on the riverside you’ll get to spot a number of colourful birds such as kingfishers, cormorants, kites, terns, and darters.  Darting around alongside the banks will be rich aquatic life, including mudskippers, crabs, and frogs, while you might see turtles submerged in the water.

You’ll see families living on the riverside, the women and children waiting for the local ferries to take them to market or to school for the day.

Workers, whose livelihoods depend on the rich biodiversity of the region, will be out planting, harvesting, or fishing. Toddy-tappers climbing up palm trees to collect fermented coconut sap, or fishermen wading out for their next catch.

As you sun yourself on the deck and pass through the lakes and waterways, the helpful staff onboard the kettuvallam will point out the local flora and fauna, and tell you about local customs, livelihoods, and industry.

When to visit the Kerala backwaters

The backwaters are a popular place to visit all year round due to the moderate climate in Kerala. You may want to skip the heavy monsoon season, which falls between the months of June and October, but keep in mind that the spectacular boat races are often held during these months.

From November, the rains start to recede, and as it gets closer to the end of the year, the temperatures start to cool somewhat, reaching average lows of 23 degrees, and average highs of 32 degrees, making it a perfect season for exploring the backwaters.

The temperatures start hotting up again in February, with much more humidity in the air. The average maximum temperature during this time is 36 degrees, but while the days are hot, the evenings are pleasantly cool, making overnight stays in the backwaters incredibly comfortable.

How to get to the backwaters

If you’re heading to the backwaters independently, a private taxi or bus from the nearest international airport in Kochin takes about two hours. If you’re on a tour with Newmarket Holidays, an overnight trip in the backwaters comes as part of its incredible tour around Kerala and India’s South.

As part of the wide-ranging itinerary, you’ll get to explore the modern city of Bangalore, head to Mysore and the Chamundi Hills, see Tamil Nadu and the hill stations of the Western Ghats, before heading into Kerala and beyond.

Explore Kerala's stunning canals, lakes, rivers, and lagoons on one of our escorted tours.